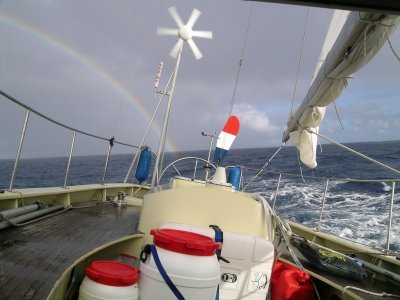 Living off the grid

What does it mean to live off-grid?

Obviously it means not connected to any grid, meaning self-supporting for a certain amount of time (mostly expressed in months rather than years).

To keep it limited to what I know and what is unsually meant I talk about living of the electric grid: you produce your own electricity.

(Picture)
Truly off-grid for 5 weeks... between Canary Islands and Caribbean.


Why off the grid?

Many people claim that this is environmentally friendly,'green'.

Unfortunately producing your own electricity is in itself not green. Local and small scale power generating is usually less efficient than large scale plants. More important is that you normally produce more electricity than you need, so you 'throw away' a lot of generated energy.

Why? Because the sun does not oblige you by shining a constant amount of light on your panels all year round, nor is the wind nice and constant for 365 days a year. Unless you accept that your fridge is not running half the time your setup will be designed in such a way that you, on a weekly average, produce enough energy in all seasons.
That means that during prolonged periods of favorable conditions (usually summer) you will produce a lot more than you need. So if you want to be green or reduce your costs, you produce your own green energy (sun, wind, water etc.), and stay connected to the grid. That way your overproduction is used by your neighbours.

There are, however, a few remaining reasons for living off the grid.

The most obvious reason is when there is no grid, or connecting to the grid would be very expensive. In that last case it can be cheaper to install your own power plant in stead of paying to get connected.

The less obvious reason is however the 'green' choice for living off-grid: it forces you to become aware of the value of energy. Not expressed only in money, but expressed in pure awareness: when your battery runs down you know you have to reduce your power consumption or you will have to read at candlelight.


The true value of off-grid

As mentioned I believe the true value lies in awareness. An off-grid system is usually a large investment, the size of which is determined by your expected needs.

If you would design an off-grid system for an average household in a seasonal country like the Netherlands, and design it in such a way that you have all-year no-worry availability of power the system would cost around 100.000 Euro's.

However, if you design the system so that during 'bad spells' only the essential usage of power is supported you can cut the investment in 3. That means that you might have to postpone your washing until there is sun (using the solar boiler for hot water of course).

If you then really look at your power consumption, and do something about it, the investment can be cut in 3 again. And suddenly the price of that A++ refridgerator is earned back not over a period of 10 years, but right away with a reduced investment of your own power plant!

The true value of off-grid is awareness of energy costs over a long period of time, and awareness of the importance of adjusting your consumption to the current availability of energy.


The price of off-grid electricity

The batteries will last (hopefully) 10 years, so over a period of 20 years (the expected lifecycle of such a system) an additional set is needed, costing at current prices 1.800 euro. The generator is not used much so is not expected to wear out, but will require some fuel and maintenance. Current usage is 30 liters per year, at current prices 60 euro. Plus maintenance the generator will cost about 100 euro x 20 years is 2000 euro.

As this simple example shows calculating the price of off-grid power is based on assumptions. But however you calculate it, if you complain about your electricity bill and think about going off-grid: think about reducing your usage instead.


One part of designing successful off-grid applications is choosing the best way to generate and store power. Even more important is thinking about the usage of power.